We were supposed to go ashore at Neko Harbour but it was ice bound.  The wind has blown the sea ice close to shore and so we can’t get ashore in the zodiacs. It’s too dangerous to risk puncturing them.

So, we have a glorious glacier cruise and see more spectacular ice formations both cascading off the continent and in the icebergs and sea ice.

We collect clear, black ice for the bar and see glacial deposits where rocks and silt are layered into the icebergs.

We also find some moss on a Point near Neko Harbour. I am hoping it’s a new description and we can go back to study it! Although it’s on a pretty sheer rock face so it would be tough to collect. I think we would need a drone to collect samples for us.

We were on an iceberg cruise on the zodiac and our guide was Juan, a fellow plant enthusiast so when I spotted green through my binoculars and asked if it was moss or algae, he was happy to get closer to check it out. It was on a huge volcanic plug with full length dykes running down the steep cliffs.

On one side was a stream of moss cascading down terraced steps in the rock face.  Very exciting.  Just above the moss we spotted 2 Antarctic tern chicks which were probably helping to fertilise the moss stream.

Then of course we were miles from the ship and the weather closed in so it was foggy on the way back and for the first time we had to navigate back to the ship on GPS. It was cold and felt properly Antarctic in the zodiac and we had to keep an eye out for bergy bits of sea ice. Very exciting for us all because it felt a bit intrepid, but I didn’t want to get a reputation for being the last one back on the zodiacs and holding up the ship. Don’t want to set a bad example!

Each day the participants on the voyage spend 4-5 hours on the leadership program and we attempt to have a landing or a zodiac cruise if landings are not possible. I am leading the on board science program with Dr Katherine Duncan from the University of Strathclyde. Kate was a participant on the second voyage (HB2) back in March. We hadn’t met before this voyage but had talked on whats app and zoom calls whilst preparing the program along with the science faculty founders, Dr Justine Shaw (University of Queensland) and Dr Mary-Anne Lea (University of Tasmania). Kate is a wealth of knowledge about the HB program, the ship and what we need to bring with us. Luckily, both she and Dr Sophie Adams (our wellbeing guru and also a HB2 alumna) brought real coffee, an important component for wellbeing on the ship as elsewhere!

Having only met on the 28thDecember, Kate and I are now sharing a cabin, running a science theme together, enjoying our new-found friendship and planning future science grant applications. We also get to be on one of the first zodiacs ashore in order to supervise the landings and are often last back as we round up the stragglers who just want an extra minute ashore and, that last photograph or video.

The next landing is on Cuverville Island (7thJan) where we find Gentoo penguins nesting and skuas patrolling.

Cuverville Island is very snowy and the chicks were tiny, but at one end it has the most amazing wall of moss, a whole cliff face, green and grey against the white-grey sky. I would love to visit again and take moss samples for dating, to see how old these moss forests are.

We watched penguins rolling eggs or feeding chicks as well as well as mating.  Presumably many of these Gentoo penguins have also had aborted attempts at rearing their first clutch of chicks this season.

I take the opportunity to segue from penguin sex to moss sex to the amusement of the nearby participants and Fern Hames (Arthur Rylah Institute)our on-board Sci-Comms facilitator.

On the way back to the ship we have a spectacular iceberg cruise, full of amazing blue, turquoise and white shapes against the grey of the sea.

Saturday (5thJan) we are back on King George Island, at the Argentinian Carlini Base. Carlini is the only station in Potter Cove and is named after a scientist Alejandro Ricardo Carlini. The station sits beneath the impressive Tres Hermanos mountain and the nearby glaciers are retreating rapidly exposing new rocky areas.

The weather is overcast, cloudy with wet snow. Young elephant seals haul out amongst the chunks of glacial ice that are washed up along the beach.

We tour the Science labs, the Dive sheds and also are given refreshments in the station mess. There is a compression chamber in the Dive facility and a technician to operate it in case the divers run into problems. 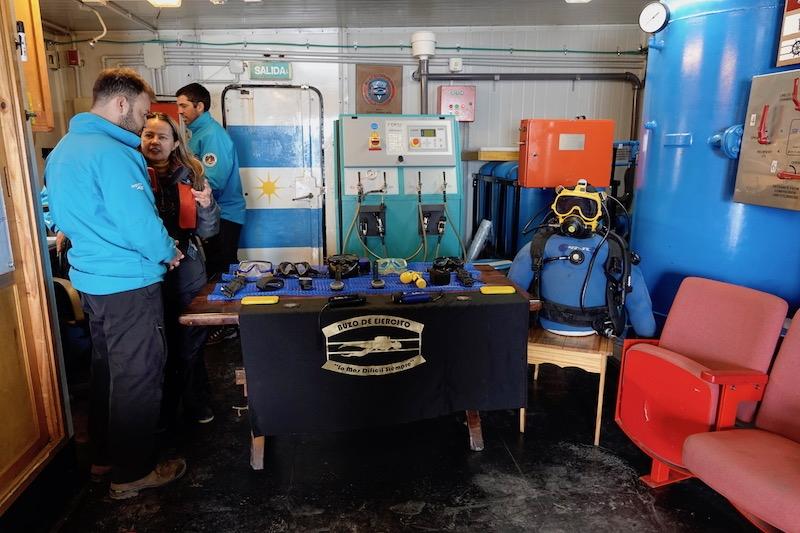 The scientists on station came from many countries and tell us about the current science research programs that are running on and around the station including a lot of marine biology and hydrology. It is great to see another base in action and to hear first-hand from the scientists about their research.  It is also wonderful that so many people on station are prepared to give up their Saturday to entertain visitors.

The projects include remediation projects aimed at understanding how plants and microbes can clean up contaminated soil around Antarctic stations. Many sites in Antarctica are contaminated with oil and other chemicals as a result of historic waste practices and some of my students have investigated how tolerant Antarctic mosses and alga are to oil and if Macquarie Island plants can help promote soil clean ups.

I was particularly excited to see so much moss and lichen around Carlini, as well as the two vascular plants that grow on the peninsula region of Antarctica, the grass Deschampsia antarctica and the pearlwort, Colobanthus quitensis.  The lichens and mosses have even started to colonise the whale bones that remain from historic whaling in the region.

The lush moss beds that grow near East Antarctica’s coast are among the only plants that can withstand life on the frozen continent. But our new research shows that these slow-growing plants are changing at a far faster rate than anticipated.

Read more in the Conversation

Plus here is a link to our latest youtube video

The paper is available here if you want to read it. This email address is being protected from spambots. You need JavaScript enabled to view it. if you want a copy.

Drones are helping scientists check the health of Antarctic mosses, revealing clues on the pace of climate change.

Read more in the Conversation

and if you want to read the paper

This page is an overview of the sceince projects that I was involved with on our January 2015 trip to King George Island with INACH, the Chilean Antarctic Program. I was working with two Chilean scientists on this trip -

Gustavo is from the University of Santiago, Chile and his projects for this trip were....

Here is my introduction to the work from the field site at Collins Glacier on Maxwell Bay.

We also worked with a team of scientists from Portland State University including Dr Todd Rosentiel and Dr Sarah Eppley. Here is Todd talking about one part of his research.

In January of 2015 I went down to Chile's Escudero Base on King George Island with the Chilean Antarctic Program - INASCH. I was working with Angélica Casanova Katny of the Universidad de Concepción and Professor Gustavo Zuniger from Santiago University. My partner Andrew Netherwood accompanied us as the expedition photographer on this trip and most of the photos you see on this page are taken by him.

This page is mostly about King George Island and Escudero Base where we stayed. For the science projects that we were attempting to accomplish see this page.

An Overview of my Antarctic Research Projects

Since plant growth in Antarctica is very slow, we use a range of molecular and physiological techniques to predict how terrestrial biodiversity in Antarctica will change as a result of climate change.

Our work is providing important insights into the biology of these plants that survive and grow in conditions equivalent to a freezer. Our research provides evidence that the Antarctic endemic moss Grimmia antarctici is likely to be more susceptible to climate change than two co-occurring cosmopolitan species Ceratodon purpureus and Bryum pseudotriquetrum (Robinson et al 2005 PDF 681k, Wasley et al 2006a, b).